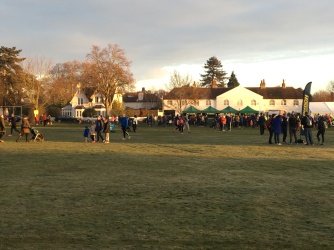 A cold start to an early morning on Griggs Hill Green for the Hampton Court Half Marathon awaited me before the race. This was to be my first half marathon on 2018 and the first running endurance test to see where I was with my fitness.

Before I begin, the race is reviewed in quite a few other blog posts so I’m not going to say too much about it. Have a read here at a fellow other blogger via Hampton Court Half Marathon 2018 This pretty sums up the course and event. This is more about the performance I put in.

I started yesterday’s race with the idea of running somewhere near to 1hr 45 mins. There have been 3 previous half marathons to my name. You can read about the Vitality North London Half here and the other two after half ironman events. What’s more notable is that the time ran for all of these was partly overcoming injuries! So although I have a PB for 1:59 I didn’t really know what I could actually run it in when fit and not overcoming some sort of injury.

Before the race began, I squeezed my way into the 1:45 pen and vowed to run with the pacers for as long as I could. This ended up only actually being about 4 miles or so as I felt pretty good and ran slightly ahead of them as parts of the course were quite narrow. Before I knew it, I looked back and they were some way behind me. I thought to just keep running with the idea that they would probably catch me up at some point.

This however never actually happened. As you can see from the mile splits below, the first 8 miles were pretty steady and I felt really good. I decided to just keep running to the pace.

What this actually meant….

I got faster! Yes my last 4 and a bit mile splits were quicker. I actually completed the half marathon in a time of 1hr 42 which absolutely smashes the previous PB time.

I met my wife and daughter at race HQ afterwards on the green for the obligatory photo shoot before seeking out a bacon and egg roll. I was hungry!

What can I conclude?

Well – I know my training is coming along very well in time for the London Marathon. I am pretty much bang on with distance and time. My goal of running sub 4 hours seems possible. The thought of having to run that whole distance again does scare you a little but the pace will be slowed. It does make me wonder though how far I can actually run at the pace I ran for the Hampton Court half. I have set aside a long run this weekend of 16/17  miles before I tackle the Big Half the weekend after.

I am probably in the best running shape of my life right now. My fitness is pretty good all round considering triathlon training is also taking place. I’ve worked hard at my running over the last two years and feel I could get faster. It certainly takes time and management of not too much too soon. I’ve learnt that the hard way!

Look out for the next update in a couple of weeks….until then enjoy what ever you do!

I’m on track to achieve a personal goal and also support the work of Place2Be, my chosen charity. I want to say a massive thank you to all those who have sponsored me and supported the fundraising events. I also know there are a lot of friends and family who are intending to do the same in the coming weeks so your help along the way will not go unrecognised.

Someone did ask me last month what I get out of doing these crazy endurance events. I’ve often thought about this and written about it in previous blog a few years back. Arguably some people would say that endurance racing is more of a mental feat than a physical one. There is a whole lot of truth in this certainly. I mean, to put yourself through hours of training when it is freezing cold outside or pouring with rain takes some motivation. That isn’t all…there is also that small aspect of daily work, as well as family commitments. You’ve got to love it to do it right? Well that is certainly true also.

I enjoy it. I love the training. I want to be fit and healthy. I want to be mentally strong. The emotion when you finish something big – especially the first time is overwhelming. This is what doing this gives me. And for those that do not often read the blog, I don’t mean just the marathon training. I’m on about the whole thing, all year, all the time. I simply wouldn’t do any of it if I didn’t love it. Yes I have those mornings when I can’t be bothered to train before work, but I push myself to do it. The feeling after is great. There are certainly parallels to daily life. I’m sure there are things we have all done that we didn’t want to do, but have felt good afterwards for doing them. Training is hard and there are times when you feel knackered or something niggles you. It is how you deal with it that is important. This explains why mental strength is important, but also built up during the process. Physical condition then comes along with it. I certainly believe exercise provides a benefit to mental health.

My training has been really consistent. I’m pleased with it so far and the long runs are slowly building up. I’m up to 16 miles now and should hit the 20 miler in a couple of weeks time. I have a few half marathons in the next few weeks also in which I will use to try and run to some particular paces to see what will be realistic in the marathon. I have an idea, but you need to test these things. Along with running, my proper structured triathlon training is taking place. I have built my runs into this as the TRI season will start for me at the beginning of May. This is always my main performance focus and provides me with the variation in my training.

The fundraising has also been moving along steadily. I didn’t really do anything over the Xmas period and so far all the money has been donated mainly from my workplace. Last week the school council held a Cake Sale for me for three lunch times as well as our parent evenings. They raised a massive £450 which was more than expected. I have a staff quiz night lined up also in March. Curwen Primary School children and staff have been brilliant in supporting the cause. I say no more!

The next blog will probably be just before the marathon now and then again just after. Until then…I leave you with a pic of the last race I did. A 10K sandwiched between a 14 mile run! And if you want to donate…it’s here: