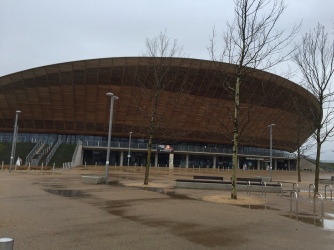 So today I visited the National Triathlon Show at the Olympic Velopark in East London. It is local to me and when I saw complimentary tickets available in my 220 tri mag back in October, I signed up for them.

So was it any good?

Well there were some good things that came of it for me, but in general I would have to say overall it was pretty disappointing. I went to the other triathlon exhibition held at the Excel in February and this in my opinion does not compete. It is far smaller. I did attend the event last year where it was held at Sandown Race Course. There were fewer vendors this year, no endless pools and far less bargains to be had. It was also noted that I didn’t see any guest speakers or demonstrations happening.

So what was good I hear you say?

Well I bought a wetsuit! A new Zone 3 Aspire 2016. At the show it was £299 but I managed to get it for £250 with a free trip kit chucked in which included googles, race belt and elastic laces. I also managed to speak to someone in regards to a Ceepo tri bike. What comes of this I will let you know.

If I had paid for this ticket and had to travel to the show then it would have been incredibly disappointing. Because I didn’t have to do either of these and I was out of there in two hours, I felt I didn’t waste too much of my day.

I think in future I may stick to the show at the excel in February. Far more choice and a lot more going on!